“Development could only be sustainable if all members of the society are part of the change that involves man, woman and LGBTI (lesbian, gay, bisexual, transgender and/or intersex) groups.”

The staff were divided into two batches and were scheduled on April 25 to 26 and April 28 to 29 at the Function Hall of the Rural Development Education Center at the Agricultural Training Institute in Quezon City.

PCAF set the training to enhance the cognitive and action learning on gender-based effective skills among its regular employees.

“The equal opportunities between men and women are necessary to create a harmonious environment not only at home but also in work place. This training will bring us closer to the attainment of an equal opportunity for women and men to contribute to national development,” PCAF Exec. Dir. Ariel Cayanan said. 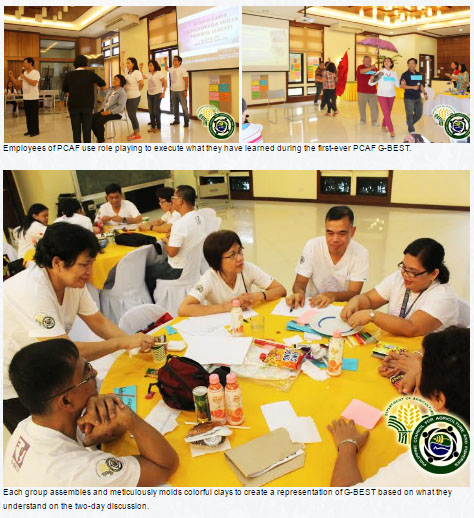 The training was designed to create a scope of 20% theory and 80% practice.

Theoretical inputs and practical application through structured learning exercises like group discussions, role plays, workshops and creative sessions were carried out in the training.

“PCAF employees were provided concept of Gender and Development for them to mainstream gender in their activities, like providing assistance to farmers,” Dr. Gallego added.

He also mentioned that the training defines that man and woman had specific roles to live, out at home, office, community for a continuous development in correlation to the changing times that was brought by modern technology and inventions.


Recognizing these components, PCAF through G-BEST translated the government’s pledge of commitment to the Republic Act 1710 or Magna Carta for Women that seeks to eliminate discrimination against women by recognizing, protecting, fulfilling, and promoting the right of the Filipino women.

Source: http://pcaf.da.gov.ph/news/2016/G-best.php
Posted by Philippine Council for Agriculture and Fisheries at 12:07 AM No comments:

The National Coffee Summit has paved the way to discuss the most pressing concerns of coffee farmers, traders and other stakeholders.

The two-day event, organized by the Philippine Council for Agriculture and Fisheries (PCAF) together with its Coffee Industry Development Sub-Committee, gathered about 200 participants on April 14 to 15, 2016 at the Department of Agriculture (DA) Compound in Diliman, Quezon City.

The coffee-concerned parties raised uncertainties on financial assistance, transportation costs, lack of interest to use available land for coffee farming and other topics related to farming, postharvest, marketing, agribusiness, policy, regulations, and research development and extension.

Where are we now?


“In the Philippines, coffee farming is dominated by small farmers with an average farm size of one to two hectares,” said Dannug in his presentation.

“We know that there is a decline in the coffee production by 4.04% in 2014 which totaled to 75,454 metric tons of dried berries. This was attributed to rampant cutting and pruning of old trees. But we know that there are replacements being done and HVCDP is crafting the conservation plan,” Dannug added.

According to Dannug, a Joint Administrative Circular (JAC) on the National Conservation Plan for Fruit-bearing Trees and Plantation Crops is being crafted by the Department of Environment and Natural Resources (DENR), Department of Interior and Local Government, and DA. The JAC states that cutting of trees will be prohibited unless the said action passes the necessary protocols set by the authorities.

Meanwhile, DTI-CAR Dir. Pablo cited the importance of the coffee industry value chain map. Dubbed as “From Seed to Cup”, she explained the significance of value chain which starts from coffee nursery down to consumption.


In a message, the department’s Chief of Staff and Usec. Dennis Guerrero reminded everyone that coffee is one of the Philippine’s champion crops.


“Nandyan po yung expertise natin at siguro, as one of the messages of the Secretary, if he is here, he would say that, ‘It’s time to move up!’ Ang sabi po ng mga kabataan, ‘Level up!’, from being farmer to farmer entrepreneurs,” USec. Guerrero added.

The rise of Specialty Coffee
According to Dir. Pablo, the Philippine consumers transcended from the First Wave trend to the Second and Third Wave movement.

In this movement, the Second Wave is in response to consumers’ desire to know the origin and understand the roasting style of coffee beans.

“Consumers buy coffee to experience it rather than just a plain beverage. One of the examples of this is Starbucks,” explained Dir. Pablo.

In the Third Wave, consumers are now becoming health conscious and have established an interest in farming and coffee production. Consumers became interested in the distinct quality of their coffee which caused higher standards in coffee farming and processing.

This wave also focused on Specialty Coffee where the coffee beans are grown in special and ideal climates and are recognizable because of its taste.

Dir. Pablo also said that in today’s market niche, Specialty Coffee is the current trend and has created a direct connection between the businessmen and coffee farmers. The government saw this opportunity to elevate the coffee culture amongst coffee growers.

“Our presentation is focused more on the production, promotion and marketing of Arabica as a Specialty Coffee. We don’t really need a big volume for Arabica, although we would want to because we want to have a more premium quality with a better price for our coffee farmers and to prepare for the ASEAN Economic Community Integration to compete well against the products of our neighboring countries,” Dir. Pablo added.

The DTI has already organized and strengthened the existing regional and provincial development councils by developing marketing programs relative to product’s marketability which enables mechanism and to keep pace with the existing demand of the market.

Working on coffee concerns
To help coffee stakeholders further understand the coffee industry and provide response to queries and clarification, PCAF invited representatives of the concerned agencies and bureaus.

On the other hand, DTI’s Negosyo Centers stationed in every region can give assistance to existing, prospective and interested businessmen especially to coffee farmers’ concern with high transportation costs from farm to buying stations.

In convincing the farmers to use the available land for coffee farming, Elnora Taleon of the DENR- National Greening Program saw the need to create feasibility studies. 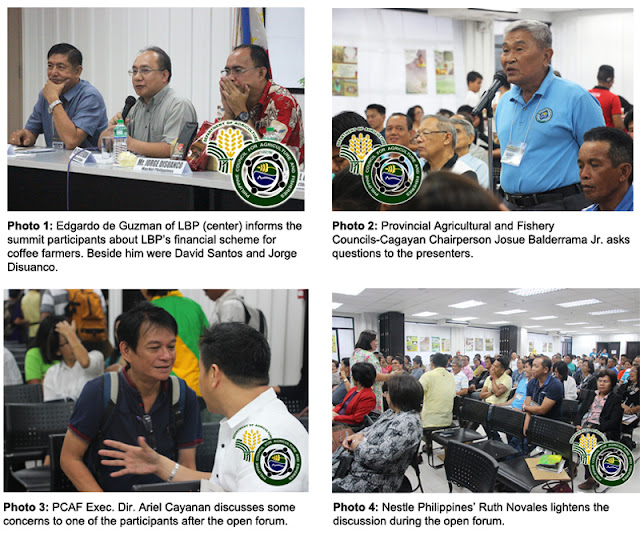 Although David Santos, Chairperson of the PCAF-National Sectoral Committee’s (PCAF-NSC) Committee on Commercial Crops and Chief Executive Officer of Ka Tribu Ug Ang Lasang Foundation, agreed to have feasibility study, Santos clarified that a large budget is needed to conduct of such study.  While waiting for the creation of feasibility study, Disuanco offered MacNut Philippines’ 10-year Cost Benefit Analysis for coffee which they can share upon request.

Aside from de Guzman of LBP, Disuanco of MacNut and Santos of Ka Tribu and PCAF, Ruth Novales and Aidel Belamide of Nestle Philippines also presented in the summit.

Other concerns brought up in the conference where noted by PCAF and will be sent to the concerned National Government Agencies. PCAF-NSC—Committee on Commercial Crops will consolidate all the possible proposals and suggestions to create sound policy recommendations to benefit the coffee farmers. 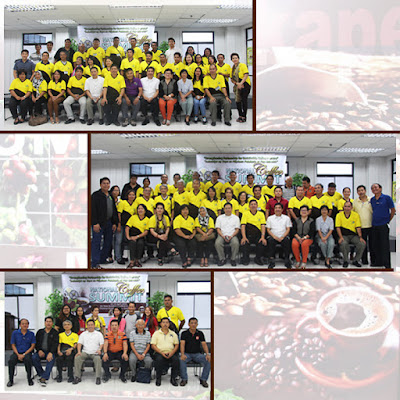 Source: http://pcaf.da.gov.ph/news/2016/coffee-farmers.php
Posted by Philippine Council for Agriculture and Fisheries at 8:50 PM No comments: